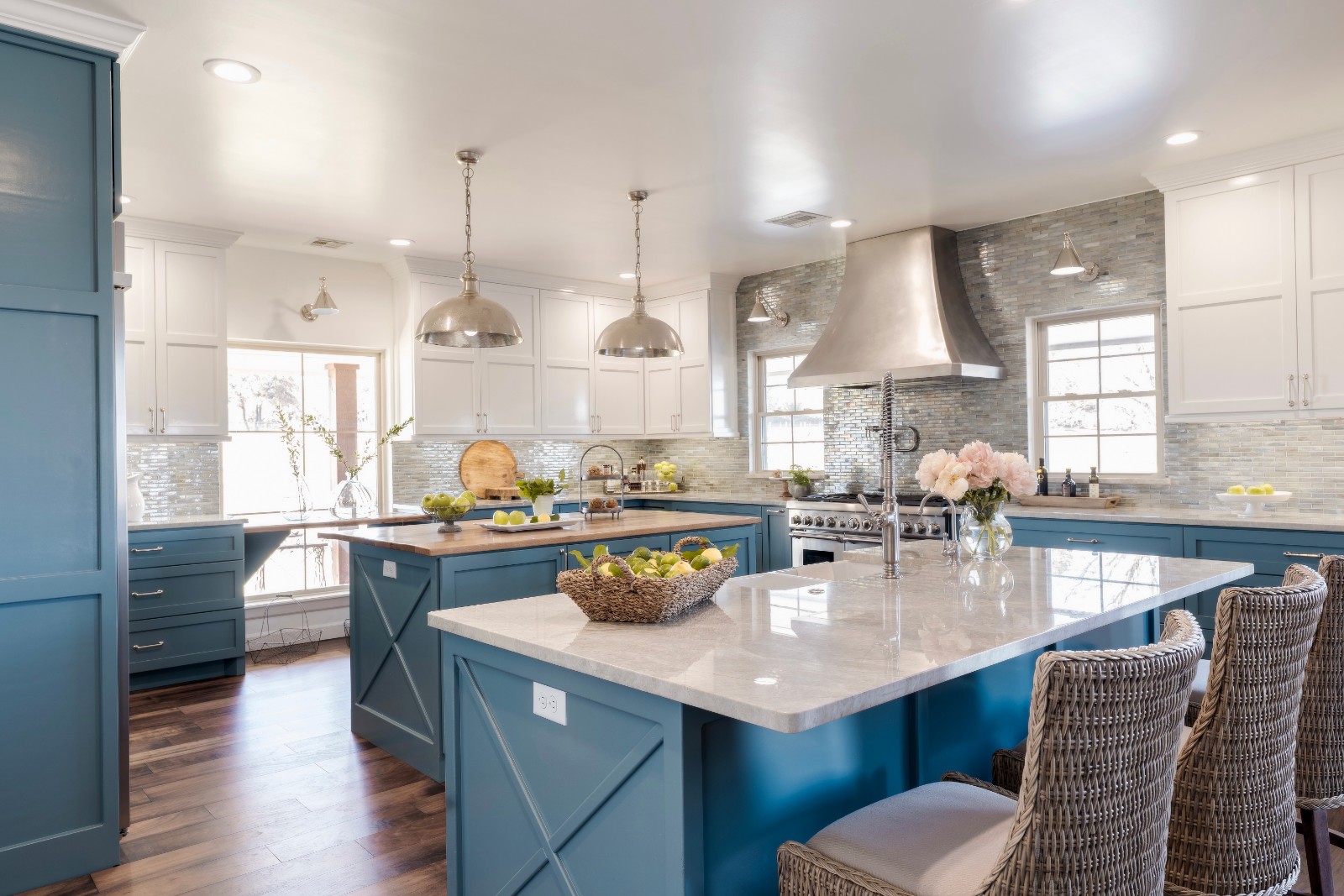 Luxury Oklahoma Farmhouse With A Hint of Hawaii

I’m finally making time to share the dramatic before and after pictures of what we referred to as the “Real Farmhouse Kitchen” remodel. 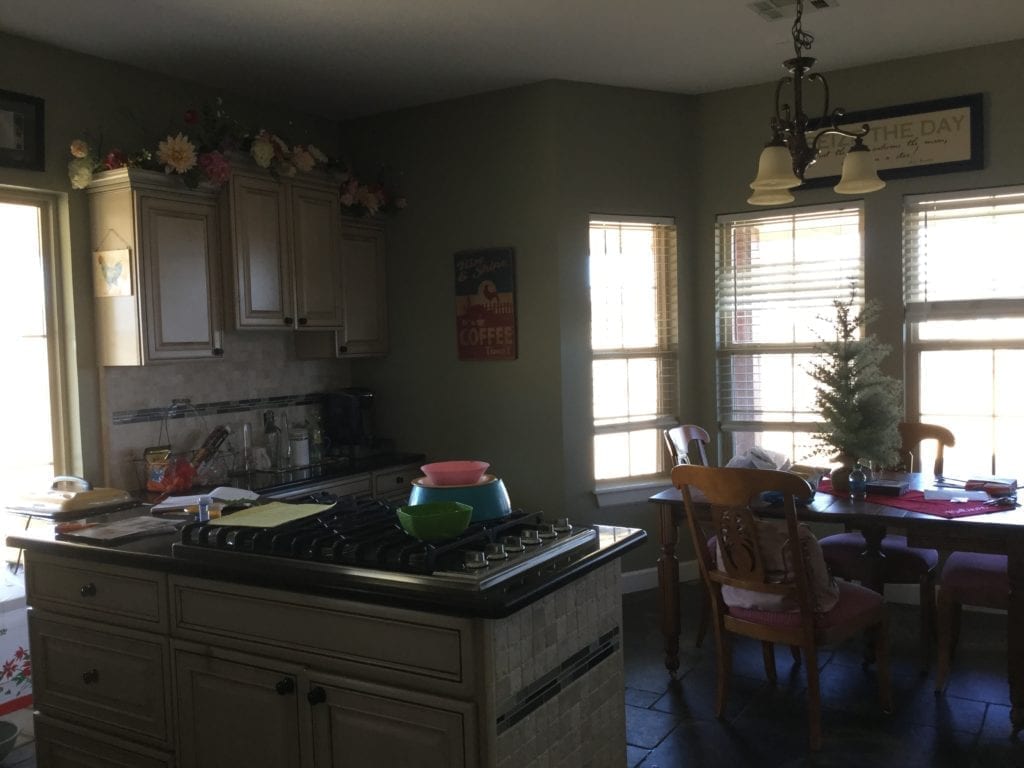 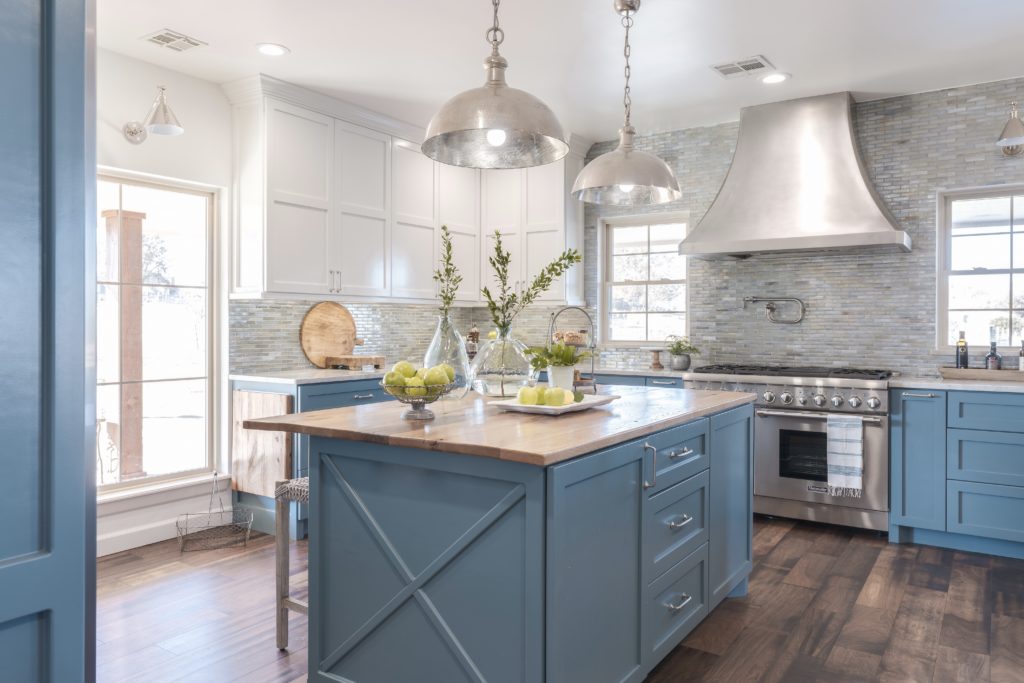 After Kitchen Remodel from the same angle as the before shot 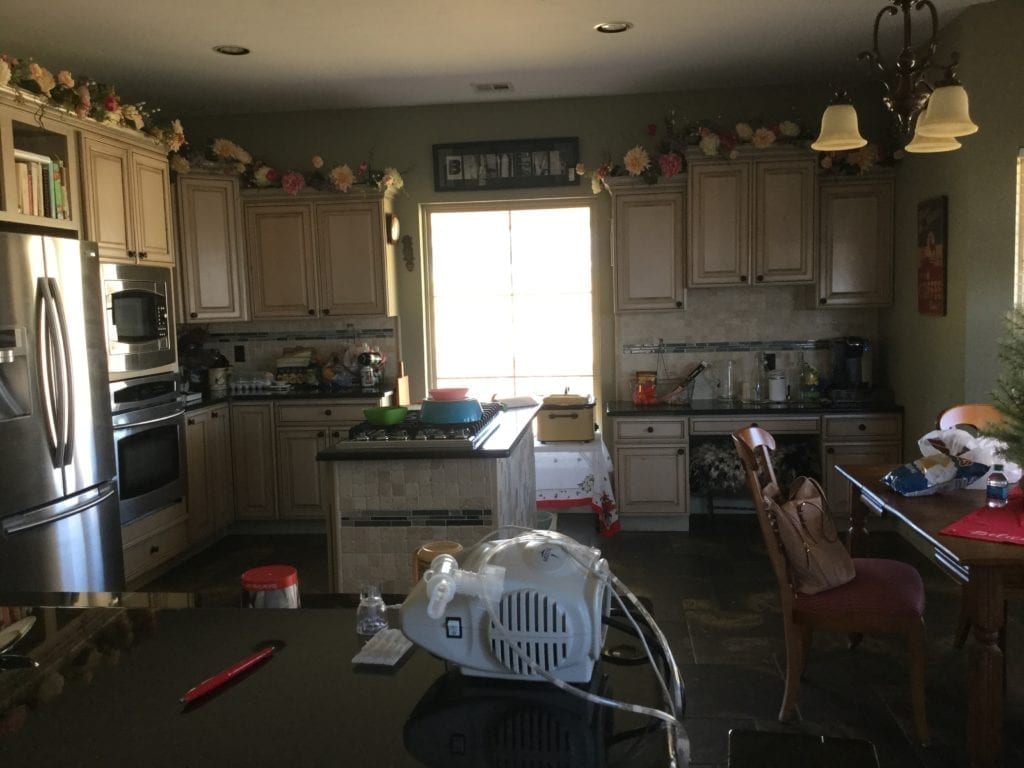 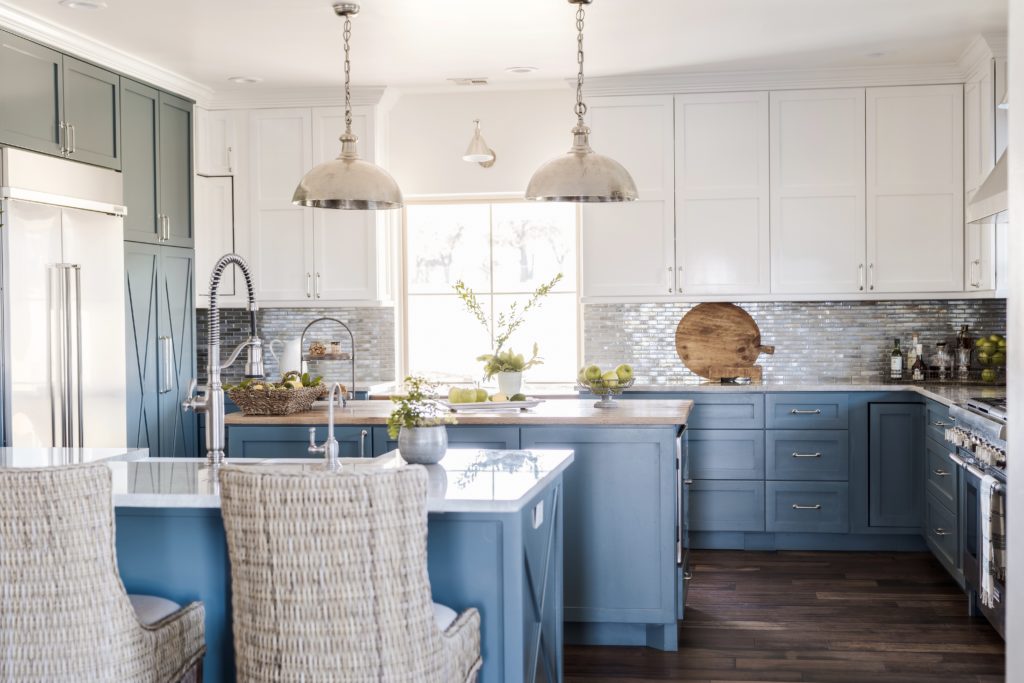 My client had lived with her not so great kitchen for almost five years then a leak in the roof caused a small hole in the ceiling of the kitchen. That was the proverbial straw that broke the camels back.

Enter me. Our first meeting revealed that she wanted everything a new kitchen could offer and actually more bells and whistles than her existing space could hold. I was determined to fit in everything she wanted but to do this it was clear we needed a little more space. Bumping out the walls in the bay window area gave us the space we needed to perfect the plan and literally tripled her cabinet and counter space. WIN! 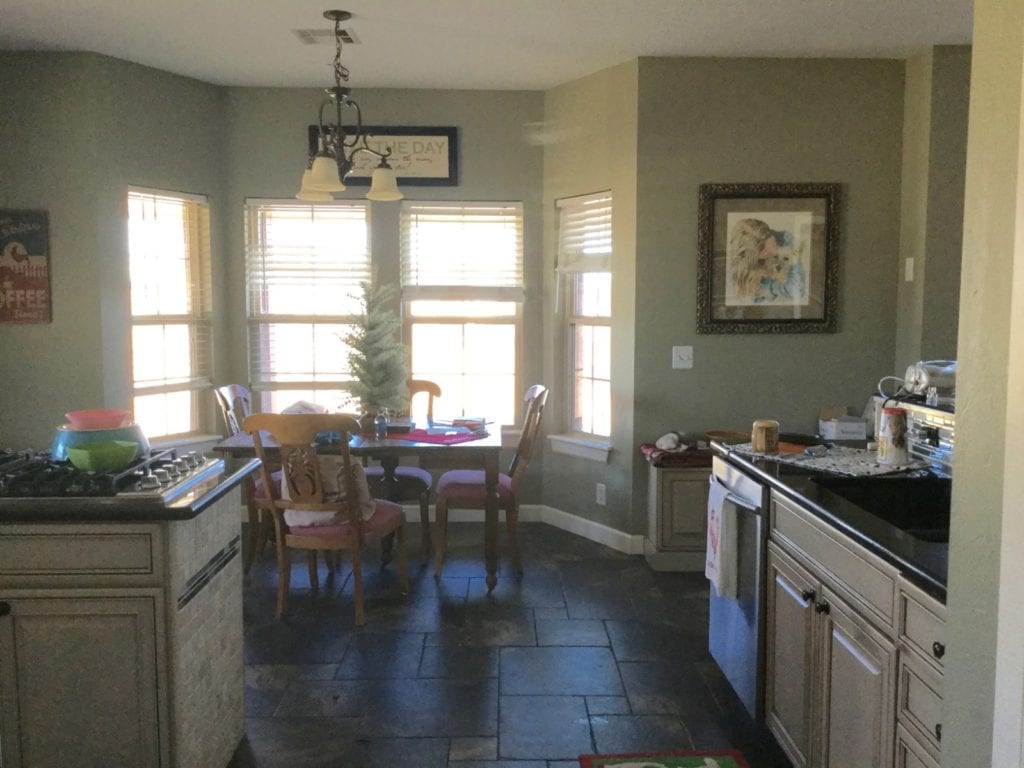 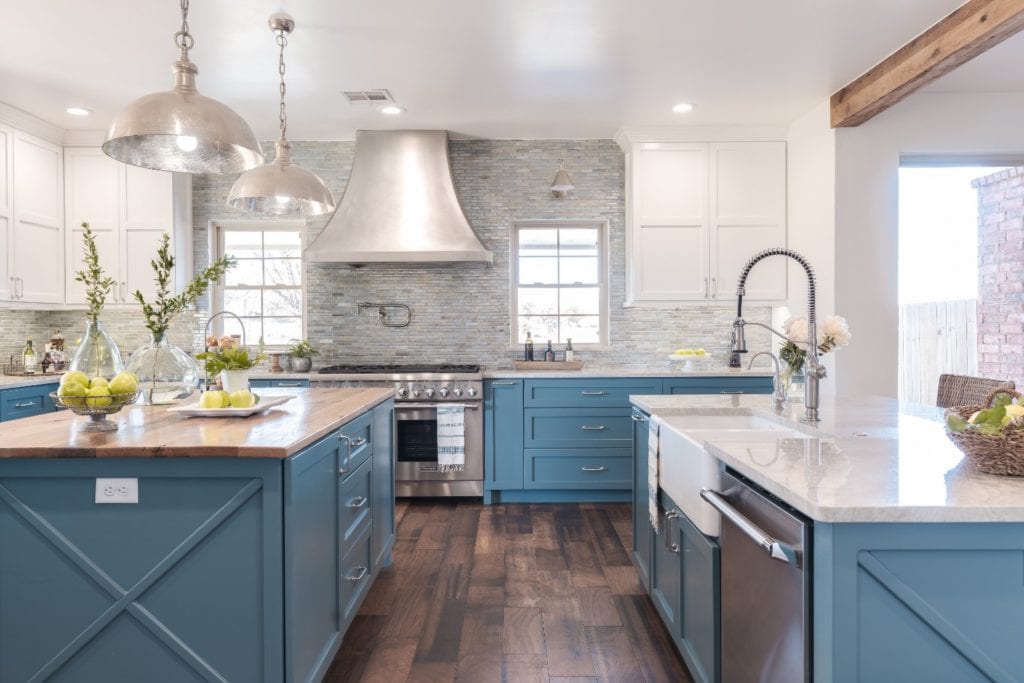 In the original kitchen, the island was not really one you would want to visit. Check out this before picture. It’s all cooktop and burner. The new plan boast two giant islands and both are packed with lots of special features. 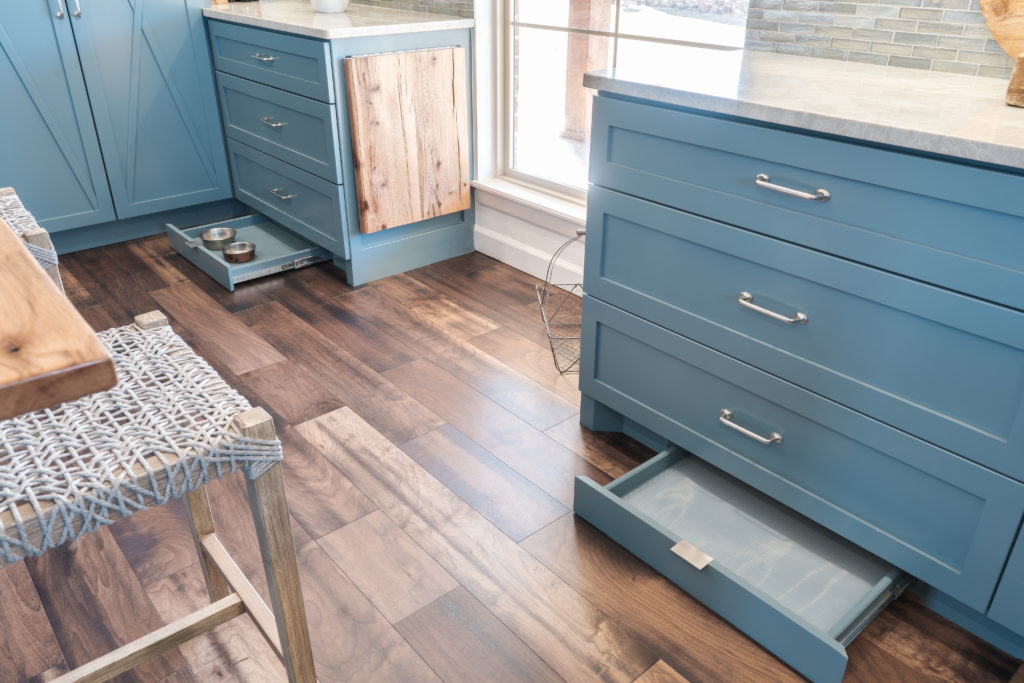 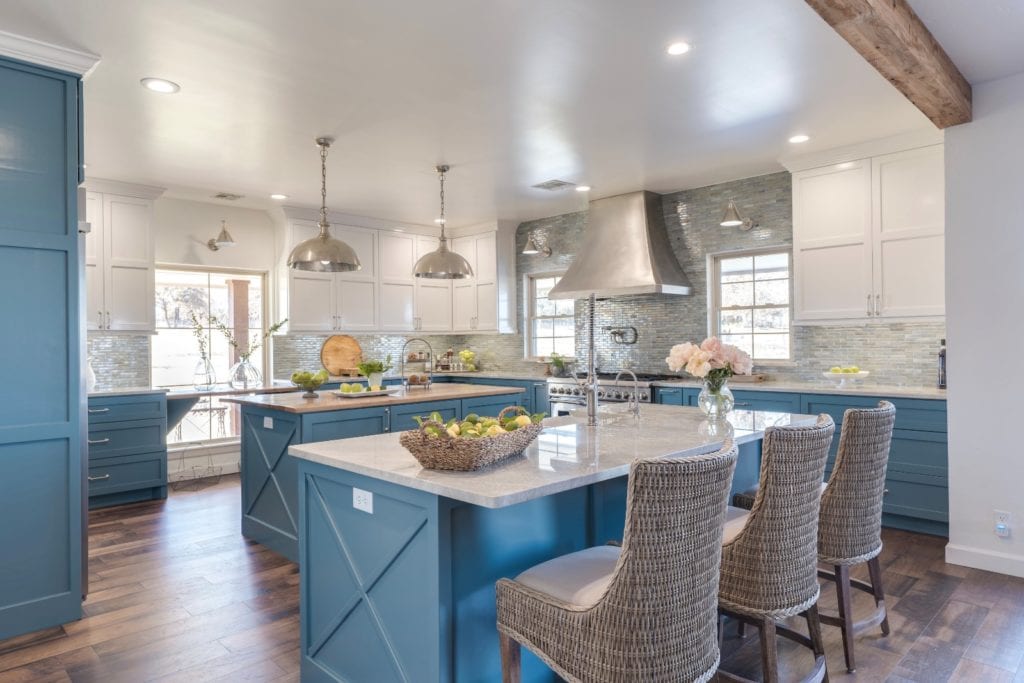 The pantry in the old kitchen looked like it might be fairly spacious inside, but that was just an illusion. Hidden within was a big plumbing stack and an electrical chase. Not a great pantry and not a great look. So we tore it out freeing up more space for the first island and creating a much better look and flow in the kitchen. 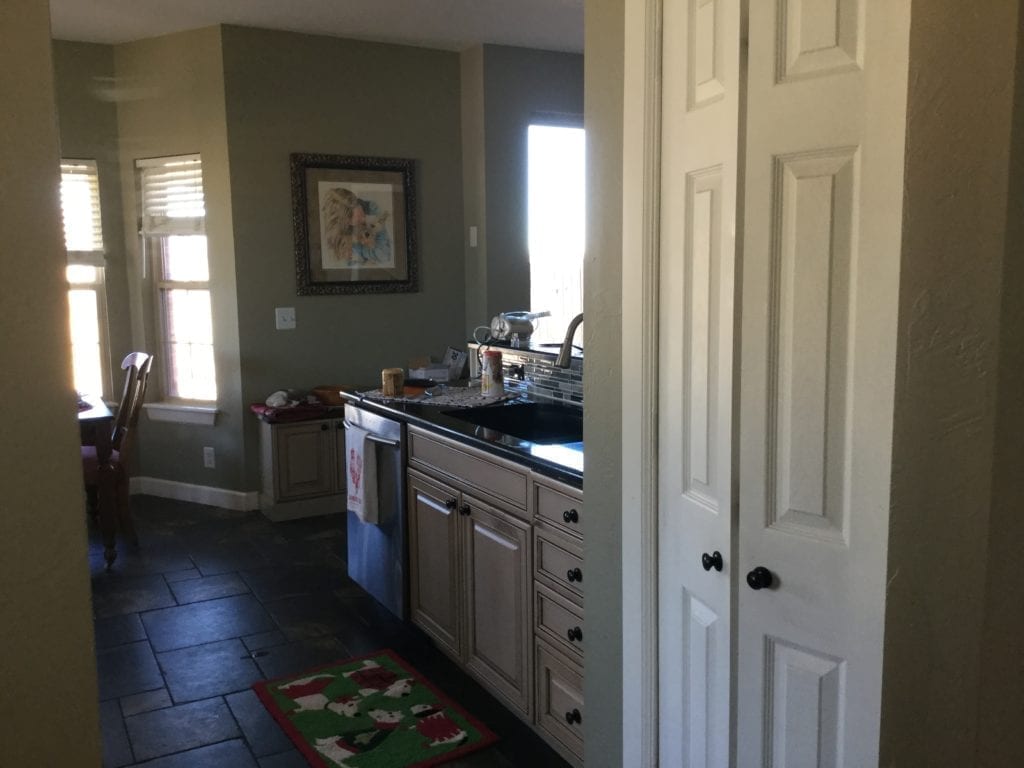 The Pantry area before and attached peninsula 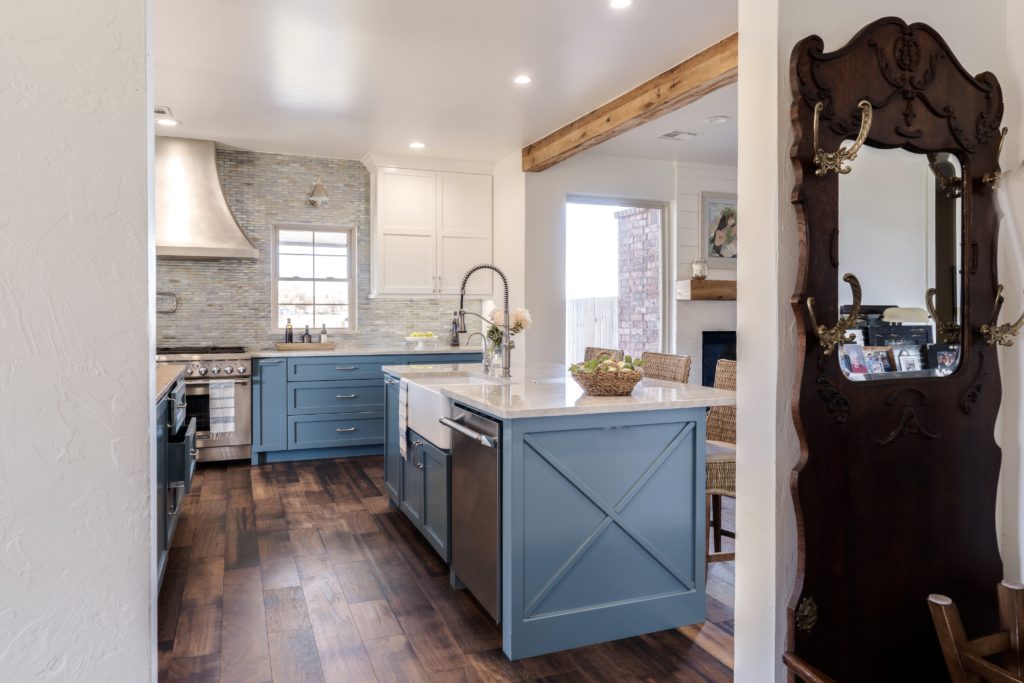 You can see from this picture how removing that pantry and relocating all that plumbing and electrical hidden within, really improved the flow and look of the kitchen.

One thing we noticed before we started construction was the ceiling sagging just a little bit in the area near the pantry.

We did some investigating and discovered that the beam supporting the upstairs of the home wasn’t technically big enough to handle the span. It’s unlikely it would have ever caved in or even caused anything more than cosmetic issues, but we wanted to fix it before we started our demo and the owners agreed that it made sense to have us build it right, while we were there. 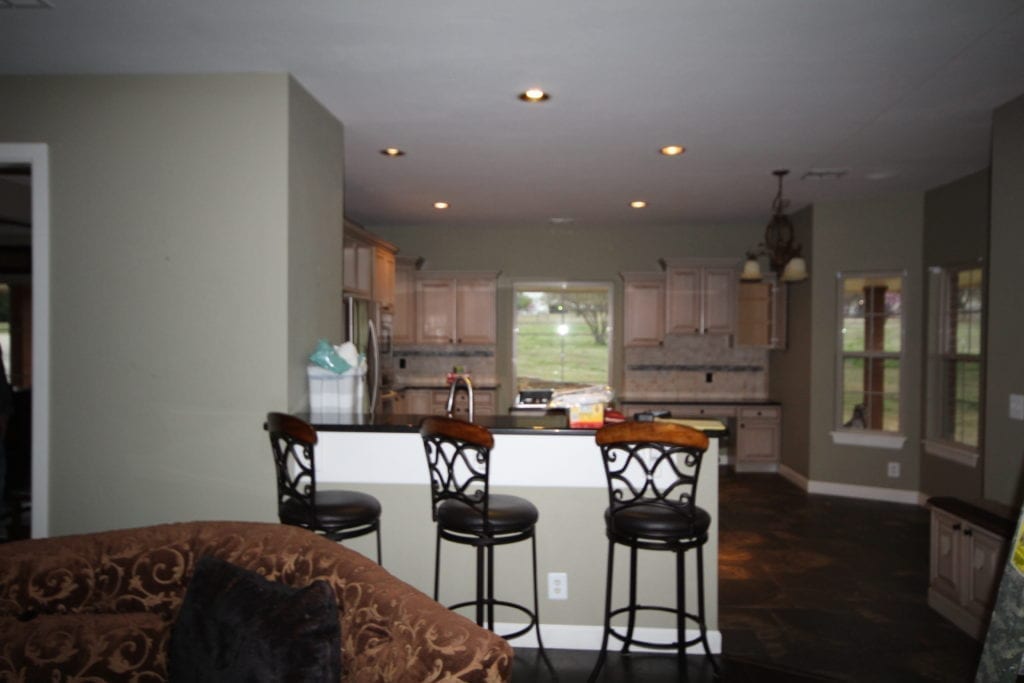 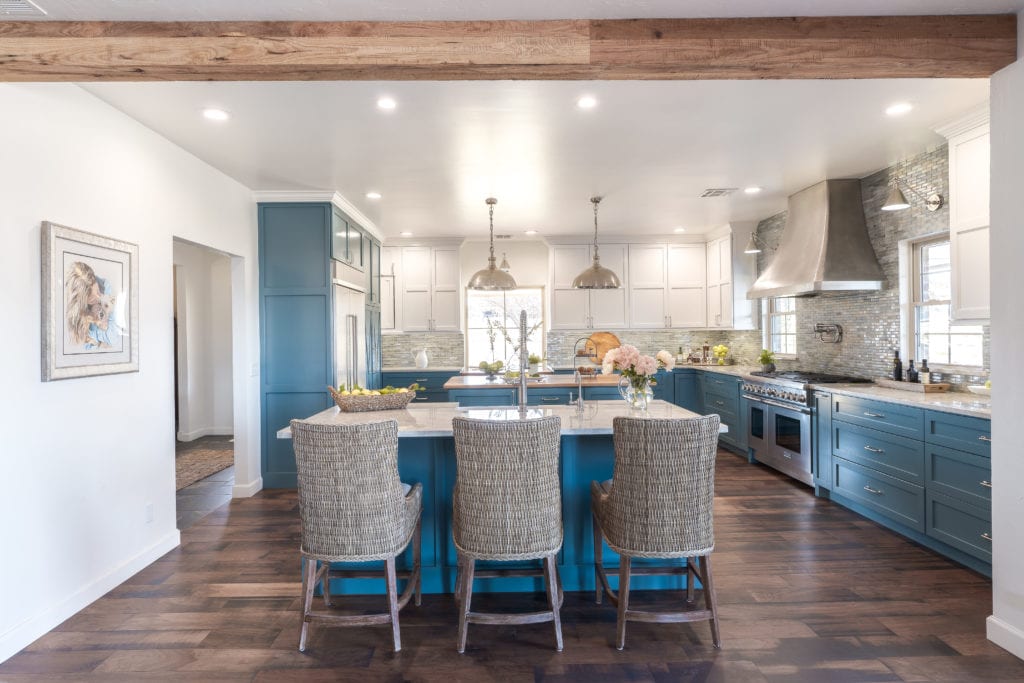 As I mentioned before, the client wanted all the bells and whistles and who could blame her.  After years of living with cabinet doors that were falling off and kneeling down to dig to the back of the lower cabinets to find stuff she’d had enough! We brought all our best tricks and organizing tools to the project to give her wish. Among those tools are divided utensil drawers, a pop up mixer stand, drawers within drawers for pots and pans and lids, built in knife blocks and utensil bins, platter racks AND the big surprise… drawers concealed within the toe kicks. 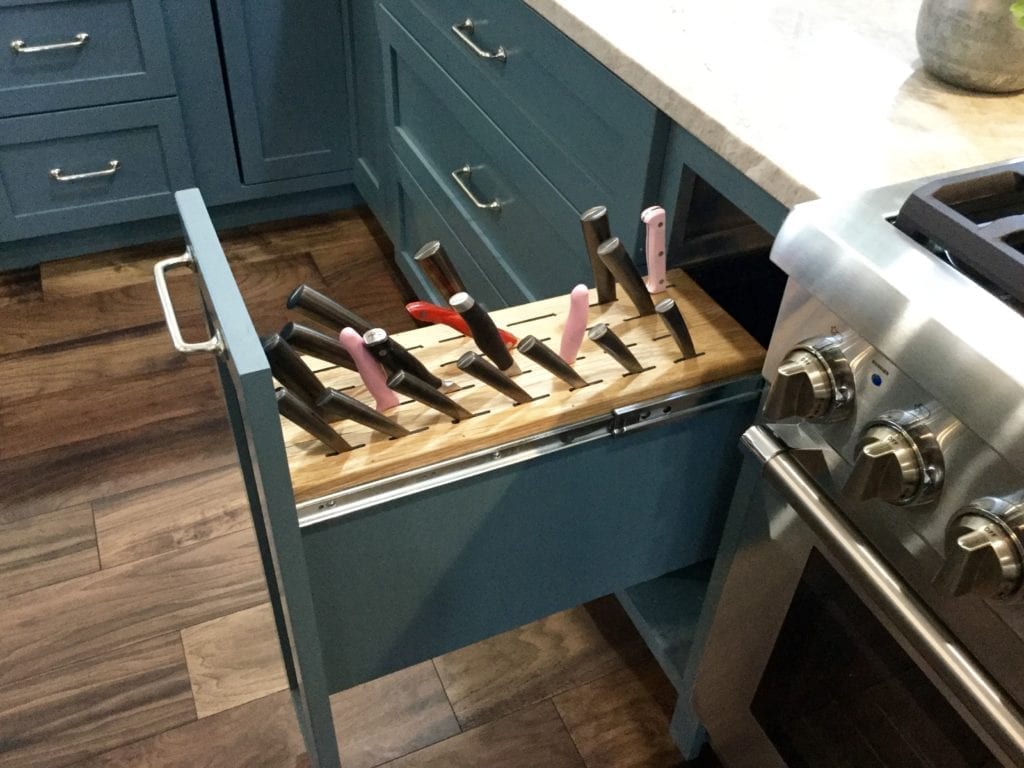 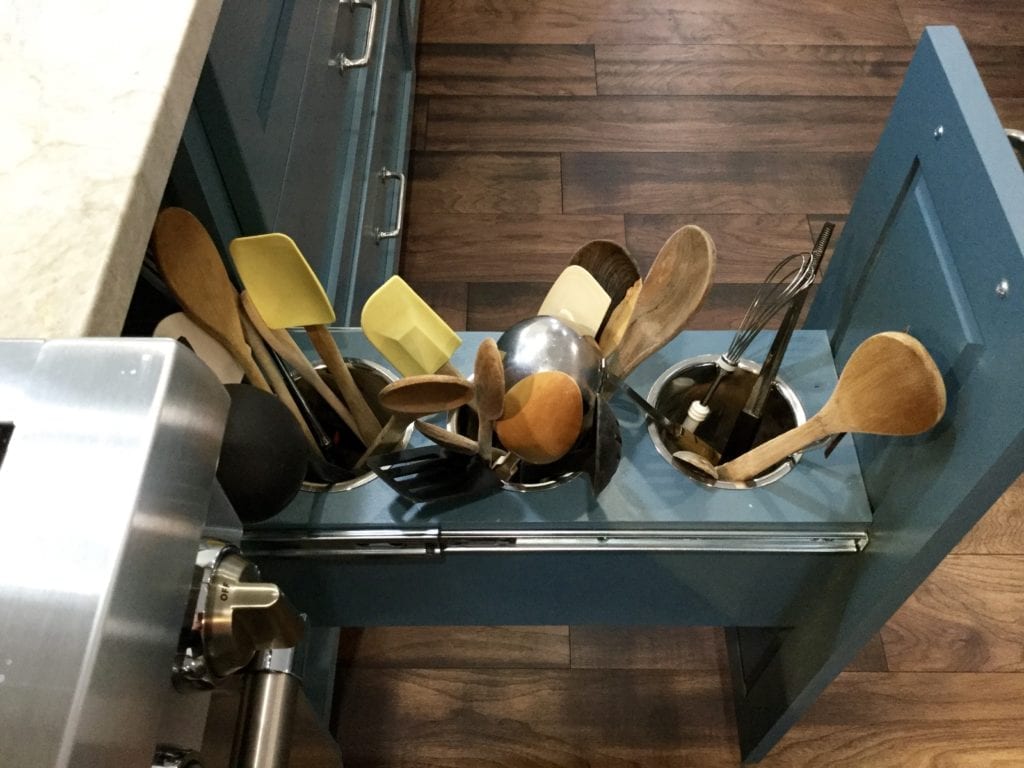 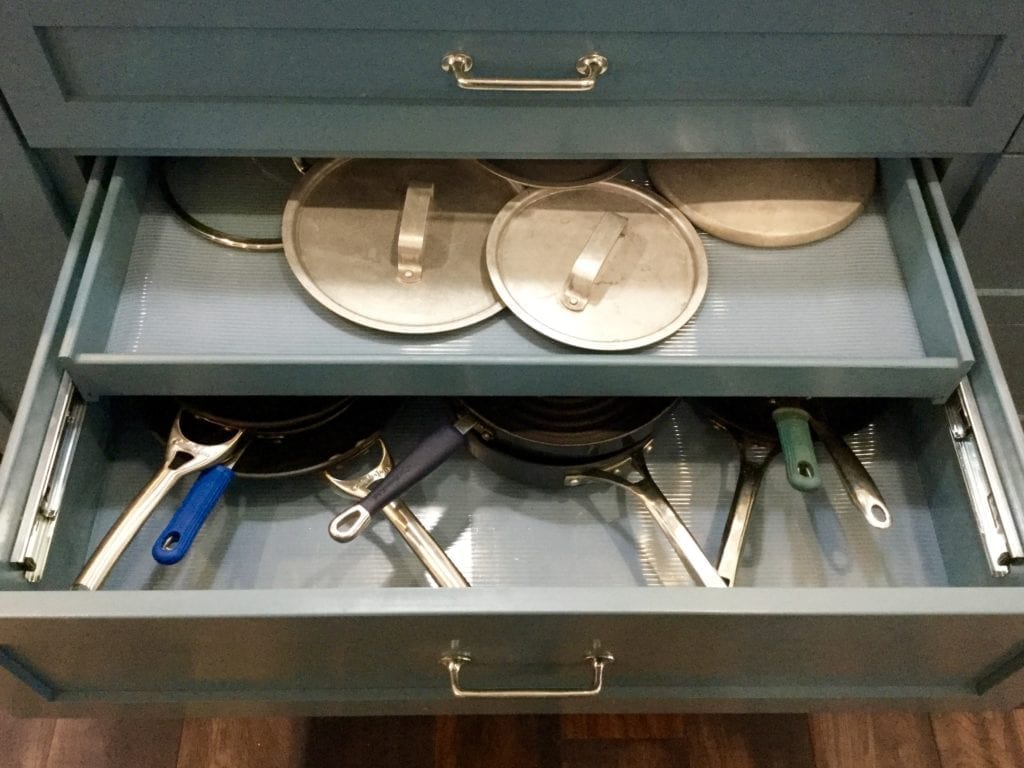 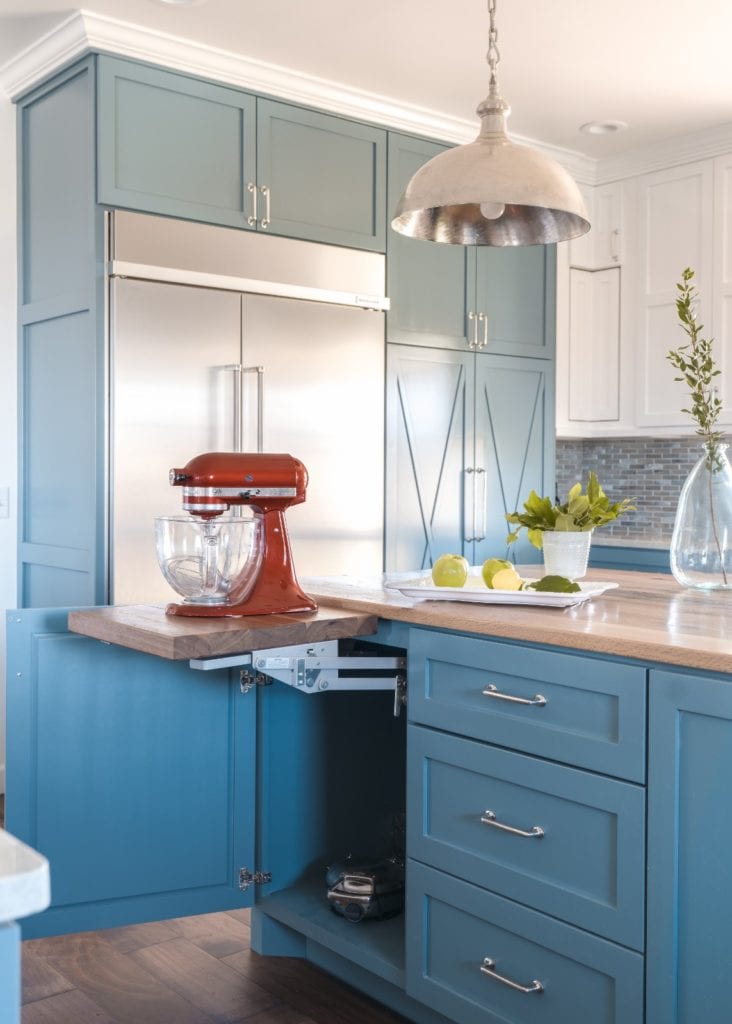 Check out all this kitchen organization

Finding inspiration for the design wasn’t difficult. Our client had spent some years living in Hawaii and clues of her affinity toward the Islands were plentiful. The iridescent backsplash tile, chromatic blue cabinets and cloud white upper cabinets might just be good enough to conjure the soul stirring feel of the islands over her morning cup of coffee. 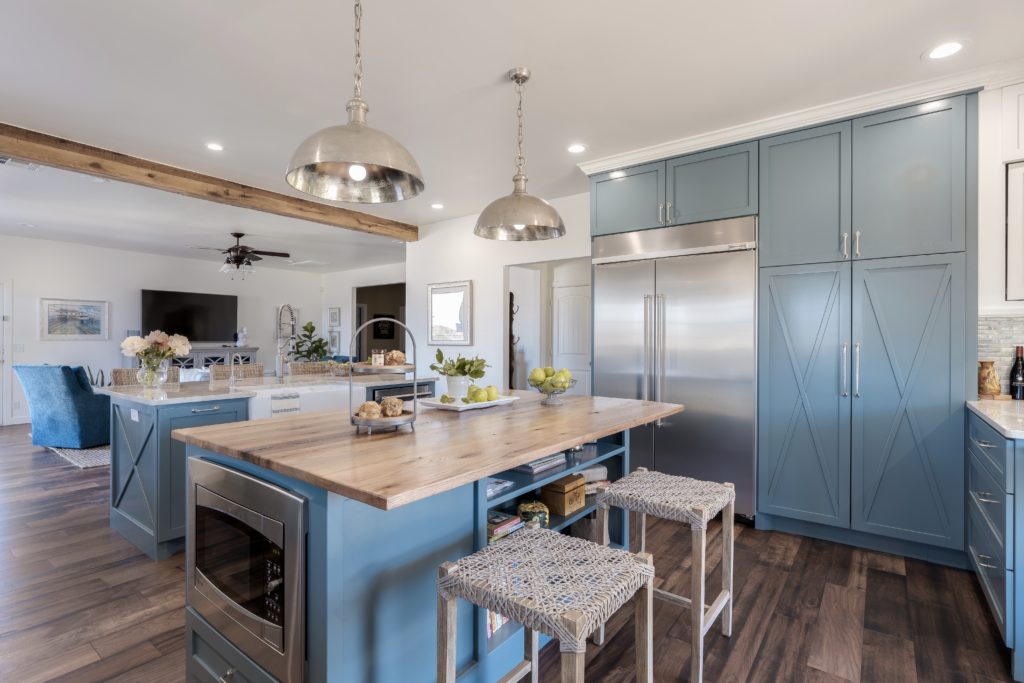 After Remodel – Our clients wanted the option to sit at either island and I thought it was a great idea. I love these woven rope counter stools, They’re very comfortable too.

With so many beautiful features in this kitchen it’s hard to pick just one, but the custom made vent hood can’t be ignored. Our original concept was to fabricate using zinc, but after some consideration we decided to use stainless steel and finish it to look like zinc. This way the color would stay the same forever and it’s a sturdier material than zinc. This shapely specimen hovers elegantly over one of my favorites appliances, the 48” Thermador Pro Harmony range. This particular one has a grill, but is more often ordered with a griddle. The convection bake offers precise baking results and the signature star shaped burner delivers superior flame spread for even heating. The Extra Low® feature lets you simmer or hold heat like nothing else I’ve seen. I have the 36” cooktop version in my own kitchen and it’s the best thing I’ve ever cooked on. 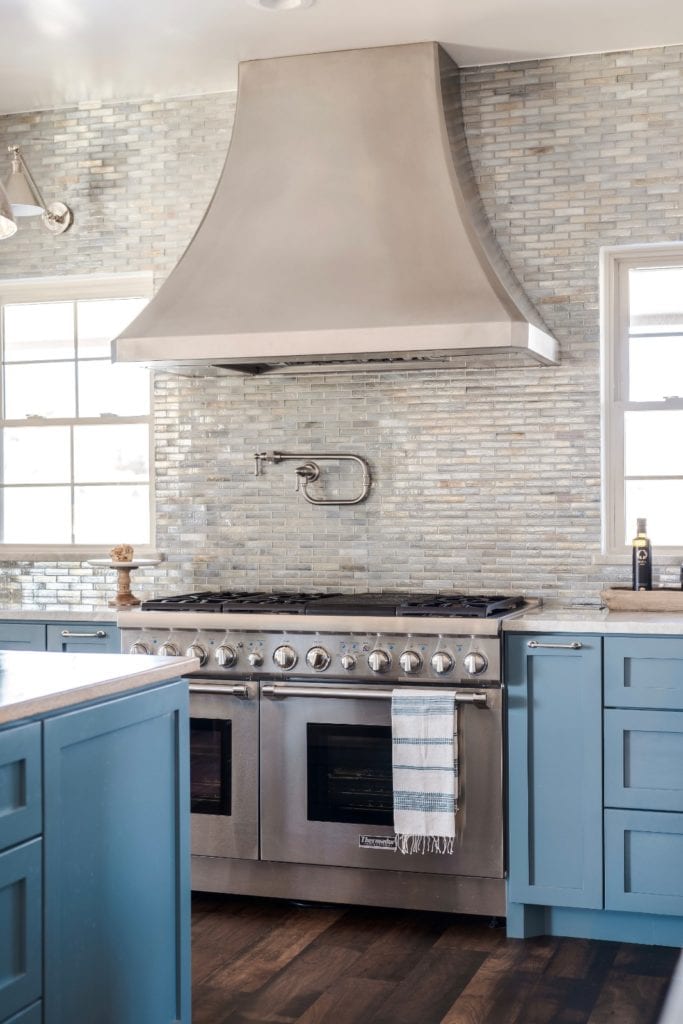 As often happens when were working on a remodel, our client’s decide that they want to do something else “while we’re there” And in this case the client decided to expand the size of the living room and replace the existing fireplace with one they could actually use. We were happy to oblige the request and gave them a shiny new living room to match their fabulous new kitchen. I wish I had remembered to take a before picture, but I didn’t think of it until we were well into the demo phase. 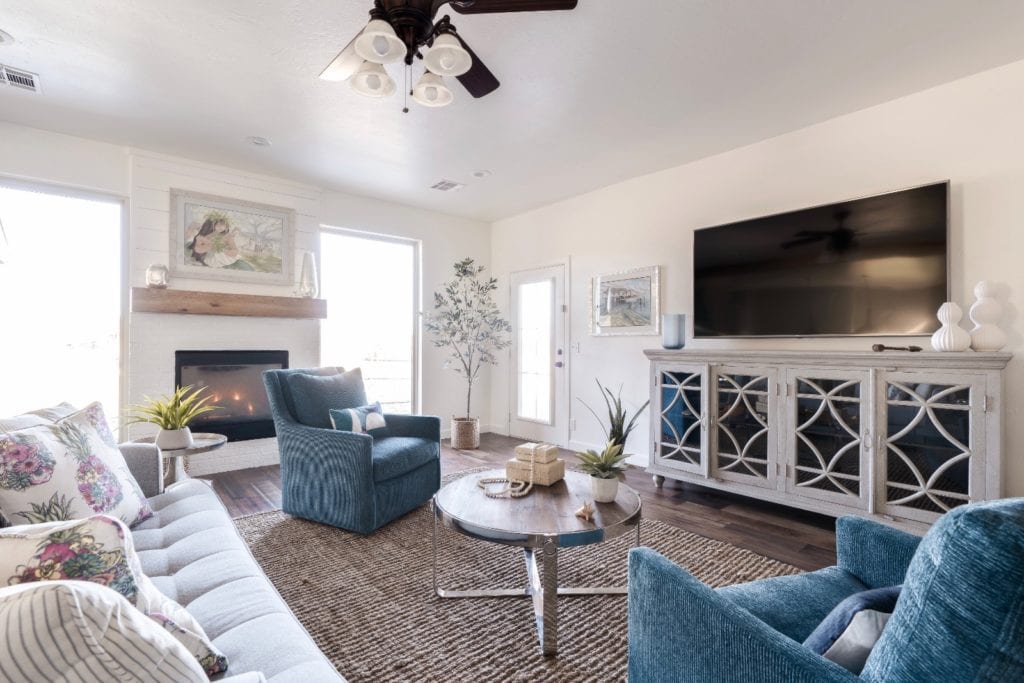 The living room after we remodeled . 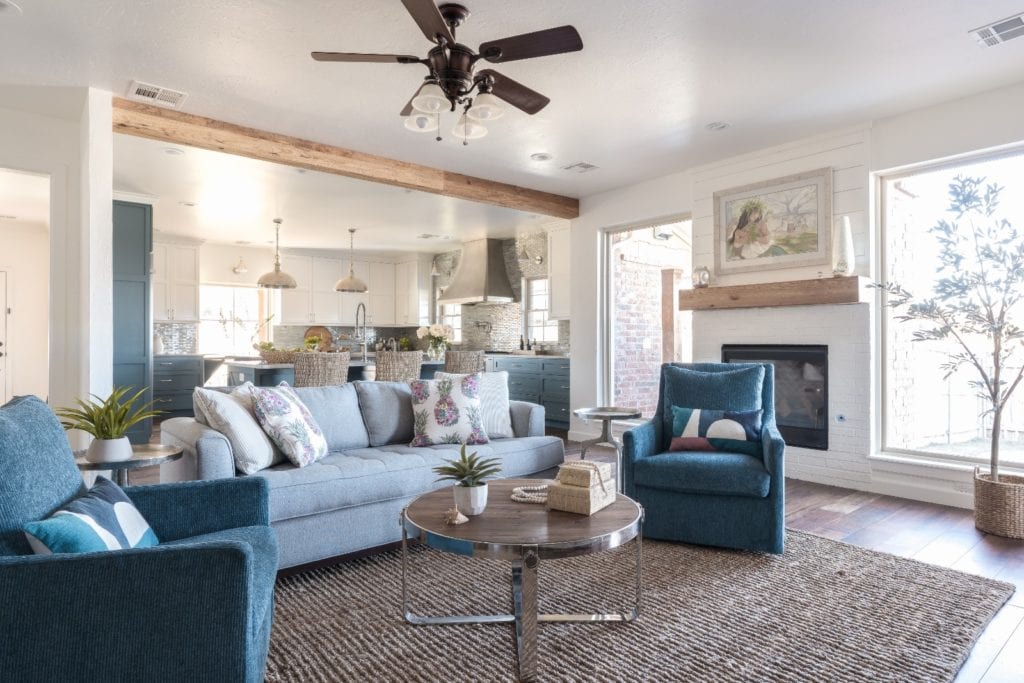 The living room after our remodel.  See how well it ties in with the new kitchen.

Everything is new in the living room.  We continued the wood floors from the kitchen into this space and purchased new furniture, accessories and a rug.  We also reframed all the artwork. 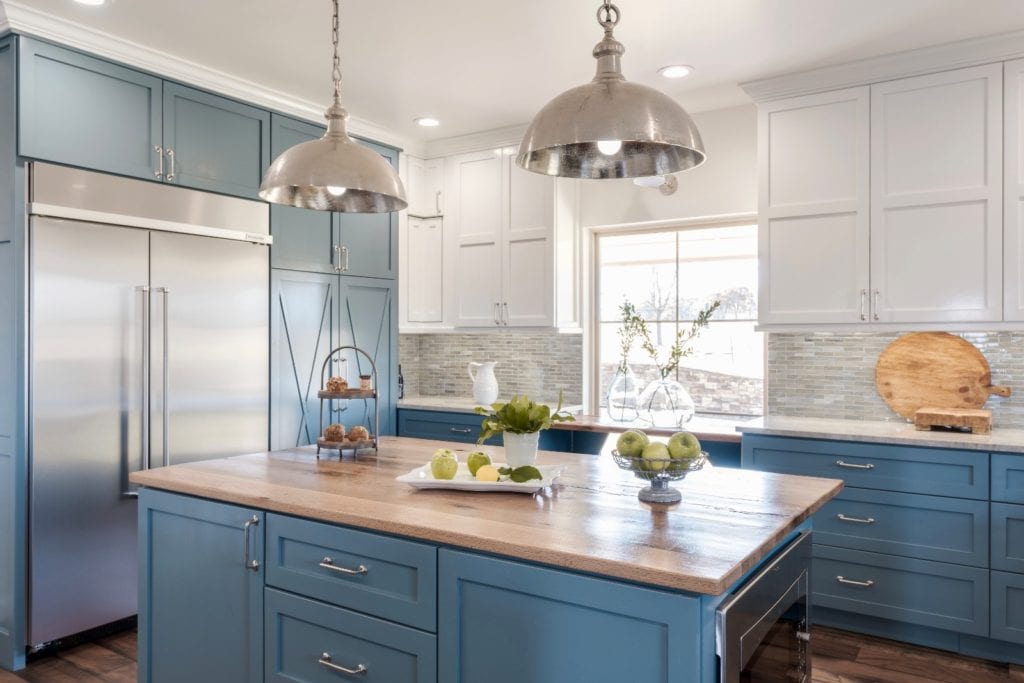 I bought these pendants for this project before I got approval from the client. I felt strongly they were the right choice for her kitchen and luckily she agreed. There were only six of them left in the world 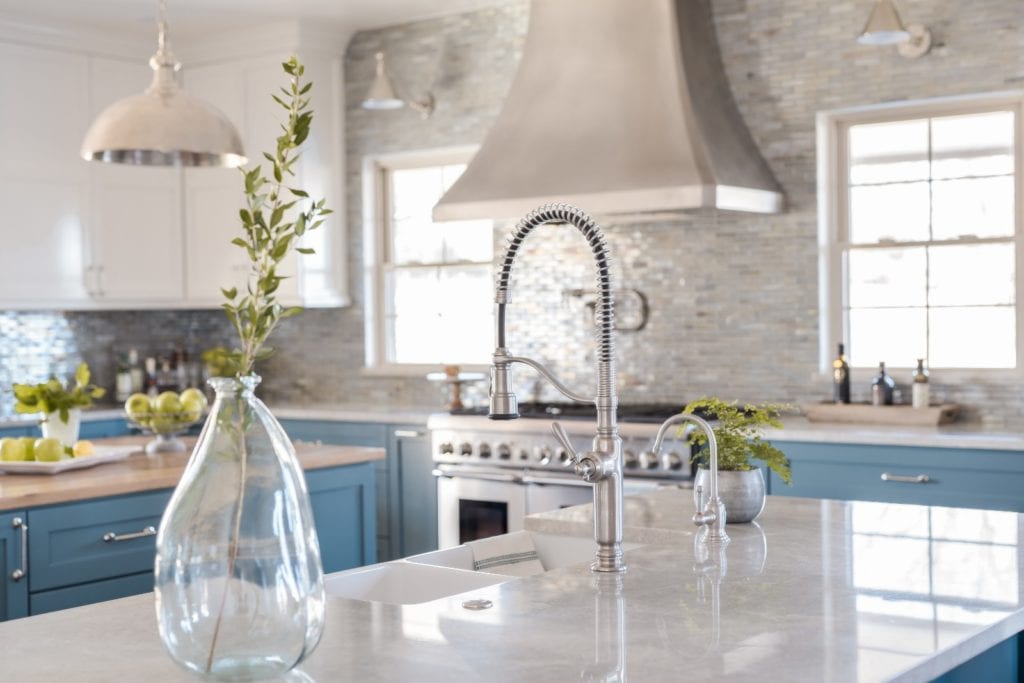 This Kohler Tournant Pullout Spray High Arch is a favorite of mine for it’s high style and incredible pre-rinse power. 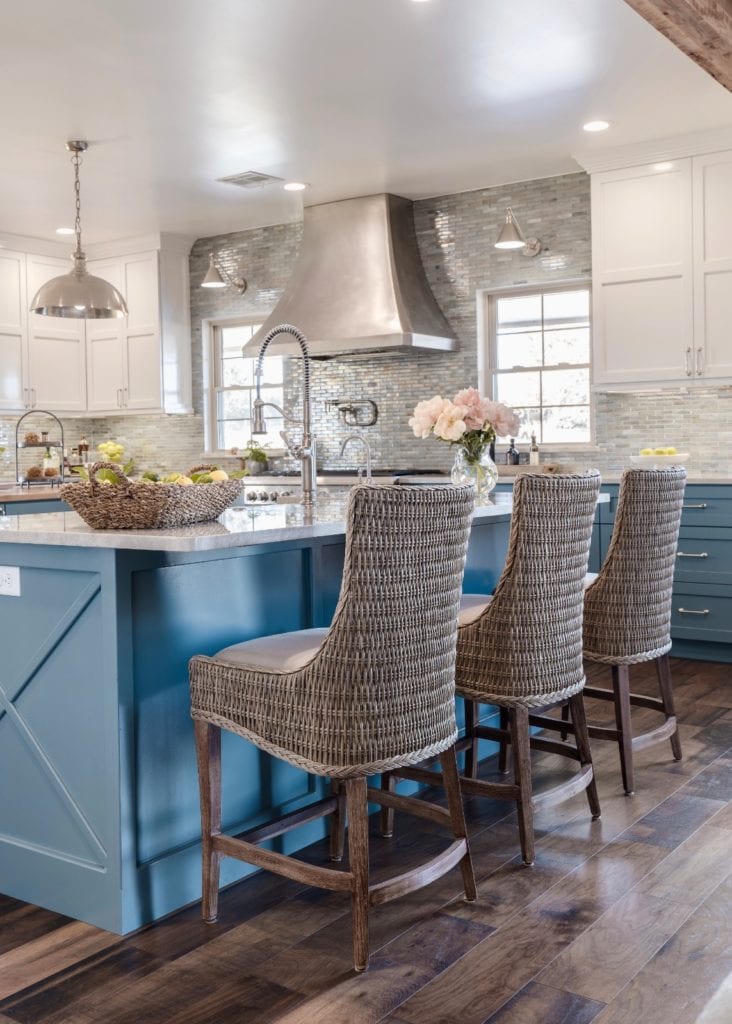 These woven wicker counter stools were the perfect choice for this kitchen. I love the textural quality they bring. Another favorite from this project. 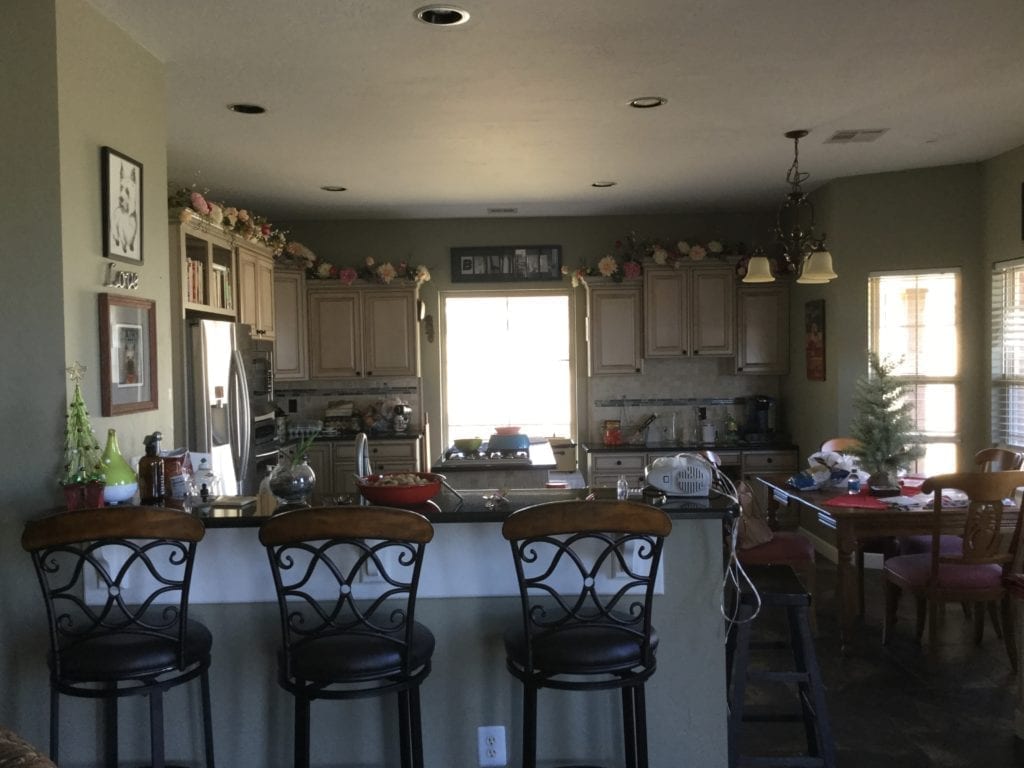 After the remodel from the same angle.

Check out all the after pictures from the Real Farmhouse Kitchen Remodel in our portfolio.  And… please pin as many as you can to Pinterest to share with the rest of the world.

email
Thank you! Your submission has been received!
Oops! Something went wrong while submitting the form.

How To Work From Home & Not Lose Your Mind

Sign up to receive exclusive finds and deals on fabulous furniture, art, rugs and home decor.

Thank you! Your submission has been received!
Oops! Something went wrong while submitting the form.